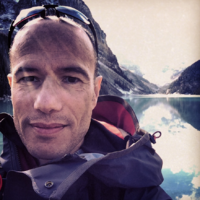 Biography
Patrick Heimbach is a professor at the University of Texas at Austin with tenure in the Department of Geological Sciences and joint appointments in the Jackson School of Geosciences and the Institute for Geophysics. He is a member of the core faculty in the Oden Institute for Computational Engineering and Sciences where he holds the W. A. “Tex” Moncrief, Jr., chair III in Simulation-Based Engineering and Sciences. Previously, Patrick has worked for 16 years in the Massachusetts Institute of Technology’s Department of Earth, Atmospheric and Planetary Sciences. He earned his Ph.D. from the Max-Planck-Institute for Meteorology and the University of Hamburg, Germany, working on global ocean surface wave remote sensing and modeling.

Patrick’s main research interest is understanding the general circulation of the ocean and its role in the global climate system. As part of the “Estimating the Circulation and Climate of the Ocean” (ECCO) consortium, he is applying inverse methods for the purpose of fitting a general circulation model with much of the available satellite and in-situ observations to produce an optimal estimate of the time-evolving state over the past few decades of the global ocean and sea ice. ECCO products support ocean circulation and climate variability research on time scales of days to decades. Emerging research foci are understanding the dynamics of sea level change, the provision of formal uncertainties along with these estimates and implications for improving the global ocean observing system for climate. Patrick has also become interested in the cryosphere. His group is improving simulations of coupled sea ice-ocean dynamics in the Arctic. Furthermore, he investigates the polar ice sheets, their dynamics, their interaction with the ocean, and their contributions to sea level change.

Since 2000 Patrick has been responsible for the algorithmic differentiation-enabled adjoint code generation and maintenance of the MITgcm, the core machinery underlying ECCO. It includes a full sea ice model, biogeochemical, and an ice stream/ice shelf module. Patrick has also been closely involved from the outset, together with colleagues at the Argonne National Lab, in the development of the open-source tool OpenAD.

Since 2016 Patrick serves on the US National Academy of Sciences’ Ocean Studies Board, since 2017 on the National Science Foundations’ Advisory Committee for the Office of Polar Programs (AC-OPP), and since 2018 on NSF’s Advisory Committee for Cyberinfrastructure. Since 2017 he co-chairs the international Deep Ocean Observing Strategy (DOOS) program. Patrick also serves on the CLIVAR/CliC/SCAR Northern Ocean Regional Panel (NORP) and the US CLIVAR Ocean Uncertainty Quantification working group. Patrick is co-founder and co-organizer of the Norwegian-led international Advanced Climate Dynamics Courses (ACDC), held annually since 2009.
Presentations
Invited Talk
Augmenting a Sea of Data with Dynamics: The Global Ocean State Estimation Problem
Applications
Computational Science
Government Strategies, Programs, and Funding
Weather and Climate
TP
XO
Back To Top Button