Full Program · Contributors · Organizations · Search Program
DeepGalaxy: Deducing the Properties of Galaxy Mergers from Images Using Deep Neural Networks
SessionThe 5th Deep Learning on Supercomputers Workshop
Author/Presenters
Maxwell X. Cai
Jeroen Bédorf
Vikram A. Saletore
Valeriu Codreanu
Damian Podareanu
Adel Chaibi
Penny X. Qian
Event Type
Workshop
Registration Categories
W
LocationTrack 7
DescriptionGalaxy mergers, the dynamical process during which two galaxies collide, are among the most spectacular phenomena in the Universe. During this process, the two colliding galaxies are tidally disrupted, producing significant visual features that evolve as a function of time. These visual features contain valuable clues for deducing the physical properties of the galaxy mergers. In this work, we propose DeepGalaxy, a visual analysis framework trained to predict the physical properties of galaxy mergers based on their morphology. Based on an encoder-decoder architecture, DeepGalaxy encodes the input images to a compressed latent space z, and determines the similarity of images according to the latent-space distance. DeepGalaxy consists of a fully convolutional autoencoder (FCAE) which generates activation maps at its 3D latent-space, and a variational autoencoder (VAE) which compresses the activation maps into a 1D vector, and a classifier that generates labels from the activation maps. The backbone of the FCAE can be fully customized according to the complexity of the images. DeepGalaxy demonstrates excellent scaling performance on parallel machines. On the Endeavour supercomptuer, the scaling efficiency exceeds 0.93 when trained on 128 workers, and it maintains above 0.73 when trained with 512 workers. Without having to carry out expensive numerical simulations, DeepGalaxy makes inference of the physical properties of galaxy mergers directly from images, and thereby achieves a speed up factor of about 10^5.
Author/Presenters
Maxwell X. Cai
SURFsara
Leiden Observatory, Netherlands
Jeroen Bédorf
minds.ai
Vikram A. Saletore
Intel Corporation 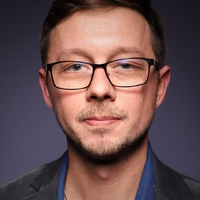