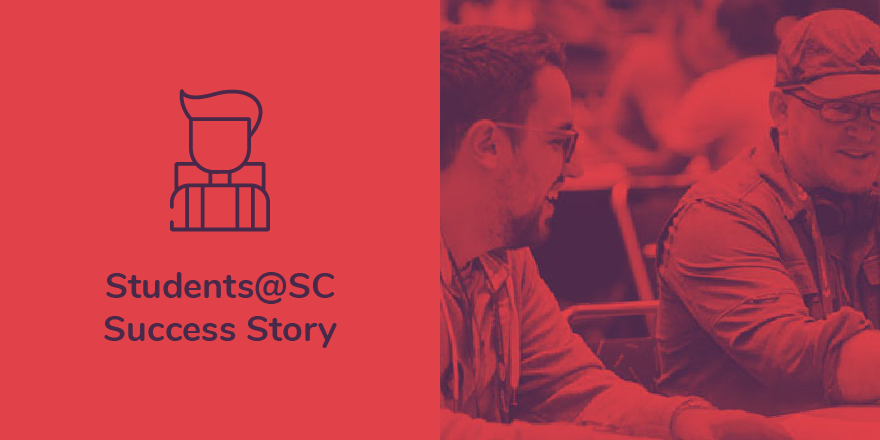 For Gabriel Freguglia Barros, a doctoral student at the Federal University of Rio de Janeiro in Brazil (Universidade Federal do Rio de Janeiro/UFRJ), word-of-mouth provided his introduction to the annual SC conference, as he learned about it from his lab colleagues who had previously participated. As a first-time applicant, he felt honored by the opportunity, and especially enjoyed the full travel support that made his experience financially viable.

As an international volunteer, Barros needed to obtain a visa to attend SC. While it could have been daunting, he found the process was easy.

“I went to the embassy with a letter from Michela Taufer (SC19 General Chair), so I had no issues,” Barros noted.

“They asked me a few questions about the conference and that was it.”

In his first foray to the noted HPC conference, Barros volunteered a total of 14 hours over the course of five days.

“I didn’t know how to manage my schedule,” he admitted.

“I was afraid that I would miss out on some workshops and such. I was lucky, because my schedule didn’t interfere with what I wanted to see, and I was able to see everything I wanted to see.”

Barros found all the events to be equally interesting, though he especially liked the elevator speech training.

“I had never thought about this,” he said.

“It was enlightening. There is an actual science to this. Unfortunately, I wasn’t able to practice. As a first year Ph.D. student, I didn’t feel I was ready for the job fair. This is good for me to know, though, and I will be able to make my speech evolve with my progress.”

Among the many benefits of being an SC student volunteer, Barros was able to see how the job fair worked during one of his assigned shifts. Now, he knows what to expect. Barros also said the mentor/protege breakfast and mixer afforded him the opportunity to meet more experienced people and “ampliou seus horizontes” (broadened his horizons).

Barros was privileged to meet an entrepreneur from Uruguay, who, unlike himself, was not an academic, yet they shared similar areas of interest.

“I am in academia. I do research in order to develop theories and programs. I am more of an abstract engineer,” he explained.

“He comes from the private industry that necessitates more concrete engineering. He must solve problems keeping economical factors in mind. My approach isn’t economically viable for him. It was very interesting to see his point of view.”

“We [academics] are theoretical, and he [industry] is practical. The conversations are very different and hard to bridge. Everything that I was convinced of within my research, now gained a few variables. I realized that there is a large spectrum within the same field. This conversation opened new doors in the way I work – not on the research itself – but keeping in mind how people will use what I do.”

Barros said he particularly enjoyed two presentations. One by Katie Bouman impressed him because she is a young researcher, which “traz esperança e inspiração aos pesquisadores jovens” (gave him a lot of hope). The other presenter was Karen Willcox, director of the Oden Institute for Computational Engineering and Sciences at The University of Texas at Austin. Willcox’s SC19 presentation was an eye-opener for Barros.

“She works on the same subject that I work on, and I mention her a lot in my work,” he enthused.

“Her presentation was so good that she had a swarm of people around her, and, unfortunately, I couldn’t meet her. I wish I had seen it before the mixer. I would have had the opportunity to have a better conversation with the man from Uruguay. I would have had concrete examples to speak to him about.”

Although he felt “a bit shy to apply as a student lead,” Barros wants to be part of SC20. After the SC19 experience, he is applying to SC20 as a lead student volunteer. Barros would be following a path traveled by many of his counterparts. For example, Karlyn Harrod, a doctorate candidate with University of Notre Dame’s Department of Applied and Computational Mathematics and Statistics, noted her own SC journey started with taking the leap and applying to be a student volunteer.

“I was fully able to perform all of my responsibilities while only having one year of previous experience as a regular student volunteer,” Harrod continued. “Additionally, if a student is applying for a lead student volunteer position, then they are really applying for a student leadership role. So, having the ability to express their drive and passion for such a role would be beneficial.”

Barros and Harrod are among the many student volunteers who grow with the SC Conference, assuring new energy and innovation with each passing year.